On December 19, 2019, Aubin Calvert provided The Lawyer’s Daily with her initial reactions to the Supreme Court of Canada’s landmark trilogy revisiting the framework for administrative law standard of review.

We are pleased to announce that Ryan D.W. Dalziel has joined the firm as Counsel. Ryan joins us from an international firm, and brings a practice that focuses on appellate work across many different industry and subject areas. Ryan has a great deal of experience in B.C., Alberta, Ontario and Federal courts, and has appeared 17 times in the Supreme Court of Canada.

The Law Society of British Columbia awarded Claire E. Hunter, QC its inaugural pro bono award which recognizes lawyers who have demonstrated exceptional commitment to the provision of pro bono services in British Columbia. The award was presented at the Law Society’s annual recognition dinner in December.

The Legal 500 has once again ranked Hunter Litigation Chambers in the field Dispute Resolution: British Columbia in its 2020 edition. Two of our counsel, Claire Hunter QC and Brent Olthuis, were included on a select list of 15 lawyers nation-wide as “Next Generation Partners”.

Claire Hunter QC was a contributing author to the newly released LexisNexis Canada publication, The Law of Objections in Canada: A Handbook. Claire contributed chapters on objections to expert evidence and the best evidence rule.

On November 27, 2019, Claire Hunter QC presented at CLEBC’s “A Litigator’s Arsenal 2019”. Claire’s presentation was on recent developments in the law on preliminary objections to rights of audience.

On November 7, 2019, Claire Hunter QC and Sarah Chaster succeeded in obtaining dismissal of an application that our client be found in civil contempt of a family court order.

On November 6, 2019, Claire Hunter QC was a guest panelist on a panel about law as a tool for social change at the UBC Allard Law School seminar “Women, Law and Social Change”.

Brent Olthuis was a panelist and skills instructor for The Advocates’ Society’s “Credibility for Litigators” professional development program in Toronto. The learning-by-doing course addressed the primary credibility issues driving trial preparation, presentation and outcome. A description of the course is found here.

Brent Olthuis served as a skills instructor in The Advocates’ Society’s “Direct Examination Skills Workshop” professional development course, where he provided a demonstration of how to lead evidence-in-chief from a witness at trial.

The Law Society of British Columbia has announced that Claire E. Hunter, QC has been chosen to received its inaugural pro bono award which recognize lawyer who have demonstrated exceptional commitment to the provision of pro bono in British Columbia. The award will be presented at the Law Society annual recognition dinner in December.

Claire has also been named a fellow of the Litigation Counsel of America.

Who’s Who Legal’s independent research team has again identified Brent Olthuis as a Future Leader for its 2019 Litigation Guide.

Hunter Litigation Chambers and its counsel were again highly ranked in the 2020 Chambers Canada guide released this month by Chambers and Partners. The Chambers Canada guide ranks lawyers and law firms in over 40 specialist practice areas across Canada, based primarily on peer and client interviews. In this most recent edition, five of our counsel achieved recognition, and across three categories. Randy J. Kaardal, Q.C., Claire Hunter, Q.C., Mike Stephens and Brent Olthuis were each again ranked as leading practitioners in the general commercial litigation category for British Columbia. Mike was also featured in the spotlight table for administrative & public law litigation in BC. Mark Oulton again achieved Band 1 recognition – the highest ranking - for his work in Agribusiness/Forestry nationally.

On September 12 and 17, 2019, Claire Hunter was a guest instructor at the UBC Allard Law’s Allan McEachern Advanced Trial Advocacy Course. Claire gave a demonstration of an examination for discovery.

CBABC has re-appointed Claire Hunter, Q.C. and Shannon Ramsay to sit on the Advisory Committee to the Judicial Council of BC for one year terms commencing on September 1, 2019.

Claire Hunter, QC and Alexander Bjornson obtained dismissal of a petition seeking leave to commence a derivative action on behalf of their client Eastern Platinum Ltd. The Court held that the numbered company seeking to commence the derivative action had not satisfied the good faith requirement set out in the Business Corporations Act. The reasons are available here.

Brent Olthuis, with Trevor Bant and a lawyer employed with government, represented the Attorney General and Director of Civil Forfeiture in petition proceedings challenging the Director’s authority to collect information from the RCMP and seeking certain relief under the Canadian Charter of Rights and Freedoms. The court dismissed the petition and found the Director has lawful authority to collect information from the RCMP and to commence civil forfeiture proceedings on the basis of that information. A copy of the court’s reasons can be found here.

Brent Olthuis and Trevor Bant succeeded in an appeal for the College of Physicians and Surgeons, by broadening a finding of contempt of court against a non-registrant. The decision represents the first occasion on which the BC Court of Appeal has confirmed that giving advice on Botox and dermal filler injections for the purposes of obtaining the client’s informed consent constitutes the practice of medicine. A copy of the court’s reasons for judgment can be found here.

Brent Olthuis and Aubin Calvert won an appeal challenging the issuance of an anti-suit injunction in the arbitral context. The judgment represents one of the first, if not the first, times an appellate court in Canada has addressed the topic. A copy of the reasons for decision can be found here.

Brent Olthuis and Trevor Bant successfully prosecuted a contempt of court application for the College of Physicians and Surgeons. In the result, the court found beyond a reasonable doubt that a non-registrant injected botulinum toxin into a client, in breach of an injunction. The court lifted the suspension it had placed on a 30-day sentence for an earlier contempt, and ordered the non-registrant to serve an additional 30 days in jail. In addition, the non-registrant was ordered to pay $7,500 ($300 of which will reimburse the person she injected).

Julia Roos was counsel for a mother and primary caregiver in successfully appealing a decision refusing her application to relocate with her child from the Kootenays to the Lower Mainland for the purpose of attending university at SFU. The Court of Appeal set aside the orders of the lower courts and substituted an order permitting the mother to relocate with her child to the Lower Mainland. The reasons for judgment of the Court of Appeal can be found here.

Mark Oulton and Aubin Calvert were counsel for Teal Cedar Products Ltd. in successfully defending an appeal brought from an interlocutory decision dismissing an application to remove a defendant on the grounds that it lacked the capacity to be sued. The decision of the Court of Appeal is available here.

Claire Hunter, Q.C. was included on the inaugural “ReferToHer” list for Commercial Litigation. ReferToHer is an initiative of Lenczner Slaght to create lists of experienced female lawyers to whom you can confidently refer work. More information about the ReferToHer initiative is available here.

Lexpert has released its 2019 directory of leading Canadian lawyers. Three of the firm’s lawyers are ranked as leading practitioners: Randy Kaardal is ranked in employment law (employer and employee), Claire Hunter in corporate commercial litigation and Mark Oulton in forestry law.

The May 2019 issue of Canadian Lawyer InHouse magazine has identified the firm as one of the Top 10 Civil Litigation Boutiques in Canada, based on a Canada-wide vote of lawyers, in-house counsel and clients.

Claire Hunter, Q.C. and Rebecca Robb were counsel for the British Columbia Chicken Marketing Board in successfully defending appeals to the Farm Industry Review Board from both the chicken processors and growers from the Board’s decision to set a pricing formula for chicken. The decision is available here

We are pleased to announce that Susan Humphrey was called to the British Columbia Bar on May 31, 2019 and has joined the firm as an associate. Susan both summered and articled at the firm after receiving a Bachelor of Laws and a Bachelor of Civil Law through McGill University’s bilingual joint degree program in 2017.

On April 26, 2019, Claire Hunter, Q.C. was a speaker at the CBA West 2019 Conference in Penticton. Claire spoke about ethics and professionalism issues on a panel entitled “When I Need You: Expert Opinion Evidence in Civil Litigation”.

Claire Hunter, Q.C. and Alexander Bjornson were counsel to Eastern Platinum Ltd, a Vancouver-based mining company, on an application for document production and pre-hearing examinations brought in the context of an application by a shareholder for leave to commence a derivative action. Our client was successful in obtaining a dismissal of the shareholder's application for pre-hearing discovery. The reasons are available here.

On April 8, the Advocates Society held a Women in Litigation Symposium in Vancouver, with Justice Suzanne Côté of the Supreme Court of Canada as the keynote speaker. Claire Hunter, Q.C. and Miranda Lam of McCarthy Tétrault LLP were co-chairs of the sold-out event. In addition to Claire, Shannon Ramsay was a mentor for the roundtable discussions and Kimberley Knapp, Rebecca Robb, Nicole Gilewicz, Julia Roos, Aubin Calvert, Sarah Chaster, Caitlin Ehman and students Susan Humphrey and Megan Chambers attended. 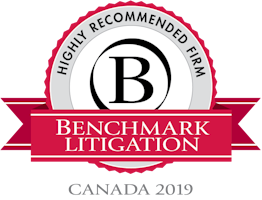 Mark Oulton and Julia Roos acted for Taseko Mines Limited in successfully defending an appeal brought by the Tsilhqot’in Nation challenging the dismissal of their application for judicial review challenging a decision of the Senior Inspector of Mines that authorized Taseko to carry out an exploration program on consultation and accommodation grounds. The original reasons for judgment can be found here. The reasons of the Court of Appeal can be found here.

We are pleased to announce that Caitlin Ehman was called to the British Columbia Bar on March 29, 2019, and has joined the firm as an associate. Caitlin was a student at the firm in 2016 and, following graduation, served as a law clerk to the Honourable Mr. Justice Phelan of the Federal Court, before returning to the firm to complete her articles.

Claire Hunter, Q.C. and Ryan Androsoff were counsel to Thomas Fresh Inc., a major vegetable wholesaler, and Prokam Enterprises Ltd., a vegetable producer, in a successful appeal to the Farm Industry Review Board from decisions of the BC Vegetable Marketing Commission. In a decision following an 8-day hearing in the spring of 2018, the FIRB found that the Commission had exceeded its authority by purporting to set minimum prices for the sale of British Columbia potatoes into Alberta and Saskatchewan without complying with the requirements of the Statutory Instruments Act. The Hunter Litigation Chambers team that assisted with this hearing also included Aubin Calvert and co-op student Diana Sepúlveda. The decision is available here.

Mark Oulton and Brian Duong successfully defended a three day application for special costs following a confidential settlement for Nu Shanghainese Bistro Ltd. and Manli Liu, in a commercial case involving the closing and sale of a restaurant business and competing allegations of fraud and wrongdoing. The reasons for judgment can be found here.

Brent Olthuis and Trevor Bant represented the College of Physicians and Surgeons in contempt of court proceedings against a non-registrant who performed dermal filler injections contrary to an injunction. In the result, the contemnor was given a 30-day suspended sentence, a two-year term of probation and a $5,000 fine ($300 of which will reimburse a client), and ordered to pay the College “special costs”. A copy of the court’s reasons for judgment is here, and media coverage of the matter can be found here and here.

Brent Olthuis is counsel for the College of Physicians and Surgeons of British Columbia in another case that has received media attention. See here. The matter is ongoing.